June 5, 2020 two women on a road trip from Colorado to North Dakota, stop to take a picture of the sunset in South Dakota. This wasn't a typical road trip. One of the woman was fleeing from her rapist. While the woman were stopped on the side of the highway, for a moment of solitude & beauty, a state trooper stopped to check on their well-being. Their quest for safety quickly turned into a nightmare.

Jennifer Ter Doest consumes Cannabis to treat her severe anxiety and depression. In January of this year, she was able to replace all of her pharmecutical drugs with Cannabis. It has led Jennifer to an improved quality of life. She says she's now balanced, steady, alert and actually wants to do things, instead of just existing.

Jennifer was visiting Colorado and considering a move there from Oregon. After just a few days in Colorado, she became the victim of a sexual assault. Jennifer and a friend gathered all of her belongings quickly, loaded her car, and began their  quest to safety in North Dakota, after the assault. Jennifer and her husband are separated, but own a home together in North Dakota. She has family and friends who are military and law enforcement there, who she knew would keep her safe, and help her through this difficult time.

On the side of I-29 in South Dakota, the state trooper who stopped to check on the women, asked who had the marijuana, after learning they just stopped to take a sunset photo. The trooper asked Jennifer and her friend to step outside of the car. They complied. Jennifer stood outside barefoot with heat-blisters on her feet. While one trooper searched her car, another conducted a field sobriety test on Jennifer, aware of her blistered bare feet. She was informed that she was facing 4 felony and 1 misdemeanor charge. Jennifer was arrested for paraphernalia, possession of Marijuana, possession of a controlled substance and possession with intent to distribute, and possession of Marijuana 2 oz to less than 1/2 lb. She reported the sexual assault she was a victim of in Colorado to the trooper.

What was found to warrant this arrest?
In Jennifer's vehicle were empty drams she had collected from her bud-tender days in Oregon, and saved to recycle. There were also 2 bowls, a bong, a nectar collector, less than 1/2 oz of concentrate, and even less flower.

A South Dakota State Trooper took Jennifer to Millbank Hospital. The staff there was instructed to do a drug screen, blood draw and rape kit. The unprepared hospital didn't have a single rape kit that was not expired. While calls were being made to locate a rape kit for Jennifer, she was instructed by a nurse to do a UA. She spoke up about doing a sterile wipe of her vagina, removing evidence for the rape kit, but was told to do it anyway. After Jennifer was released from the hospital, transported to the police station, she was then taken back to the hospital. The staff at Millbank had to do a video conference call with a hospital in Sioux Falls to complete the rape kit.

Across the nation, there is an extremely large number of rape kits sitting on shelves, collecting dust, unprocessed. It boggles my mind that victimless Cannabis "crimes" are what Law Enforcement chooses to waste their time and resources on. When there is no victim, there is no crime. Sexual offenders give their victims a life sentence from the trauma they're forced to endure.  Law Enforcement across the nation is obviously more concerned with a healing plant, than actual crimes. Their funding is usually dependent upon it. We The People should demand that our hard earned tax dollars stop being used for the plant war, and start being used to get actual criminals off our streets. Please contact your elected representatives about this matter, if you are as outraged as I.

I met Jennifer at a rest stop, while traveling on the Canna Bus not so long before this horrific experience of hers. After noticing her "Prohibition still doesn't work" bumper sticker on her car, I struck up a conversation. She is a lovely, intelligent, compassionate woman.  She posed with my Free Lance Gloor sign for a photo that will be sent to The White House, to help with the effort to release Lance from an unjust 10 year Federal prison sentence for legal medical Cannabis in Washington state. Now she needs our help. 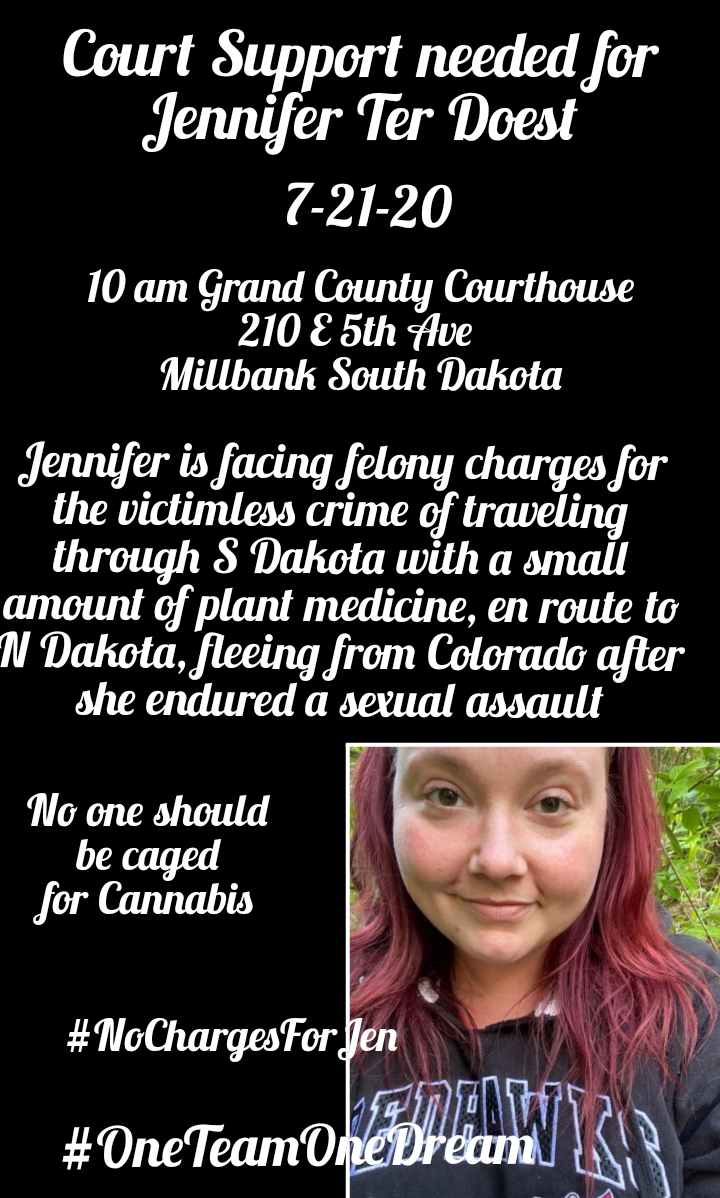